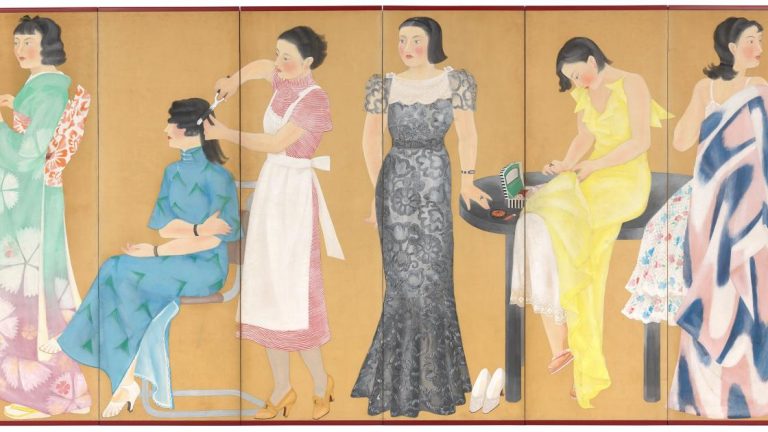 Beginning in 1923 with the Great Kantō earthquake and closing with WWII and the War in the Pacific, Japanese Modernism sheds light on the interwar period in Japan. This period marked significant social, cultural, and economic changes across the previously isolationist country. The Great Kantō earth quake caused widespread destruction across the cities of Tokyo and Yokohama, reconstruction from this disaster triggered the transformation of Japanese cities into the iconic modern metropolises we see now. During this time the largest established women’s movement in Japan, the Tokyo Federation of Women’s Organisations, emerged to aid relief effort.  Each one of the 190 works featured in this collection are new acquisitions by the NGV that will make their way into the permanent collection. Never before seen, the pieces included in Japanese Modernism shed light on an important time and place in Asian history. The exhibition also highlights women’s liberation during this time, showcasing the vibrant and bustling social life of the era with female subjects and artists alike featuring heavily throughout. Exuding iconic Art Nouveau and Art Deco design, the collection is largely comprised of everyday objects: posters, cosmetics, tourist maps, children’s book covers, scores, and an impressive display of glassware. It is through these carefully curated objects we see the traditional female ideal subverted and replaced with the new independent and vivacious woman of a vibrant period in Japanese history.

Throughout history and across cultures women are depicted in art as the object of patriarchy, defined by the male artistic gaze. Whether that be as the damsel in distress, the seductress, the wife, or the servant. Here, in Japanese modernism, we see women as confident, vivacious, outgoing, and – most importantly – independent. The fact that these women are also Asian is especially significant. White Eurocentric feminism is often held up as the gold standard for women’s liberation, but this exhibition challenges the notion by showing us strong and powerful non-white women. The new acquisitions featured in Japanese Modernism fill a significant void in the NGVs current permanent collection.

Walking into the exhibition the first piece you see is a large six panel silk folding screen that depicts women, with their stylish bob cuts and rouged cheeks, dressing themselves to go out. From the get-go it is clear that this is a collection showcasing the lives of everyday people, and the lifestyle of the modern woman.  The piece is a direct challenge to the traditional scenes depicted on folding screens. The artist, Taniguchi Fumie, showcases the exuberant new consumables designed for women: cosmetics, an electric hair curler, a mixture of Japanese and western garments, the advent of ready-made fashion. She was a relatively uncelebrated artist during her time, but as is often the case, following her death there has been renewed interest in her works. Although from a bygone era, Preparing to go out is incredibly relatable for women today many of whom share in the ritual of getting ready together weekly. 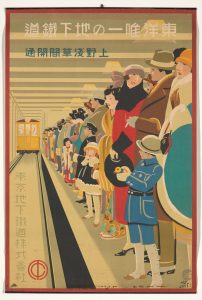 As the country rebuilt following the great earthquake, new and extensive public transport routes were implemented, mobilising the country and opening it up to a booming tourism industry. The first subway in the East (1927) by Hisui Sugiura showcases the way in which daily life changed with new infrastructure. The female subject in the foreground is cloaked in a red, Western style coat, with stylish kitten heels and cloche hat as she smiles at a man who appears to be her husband. Next to the couple, on the left, the woman is in traditional dress and appears to be travelling independently. The use of perspective in this poster gives us an insight into the diversity of people who are now able to travel with ease on board the new subway. It is representative of an era of transition, change, and prosperity as Japan emerges as a global power before the devastating effects of WWII. 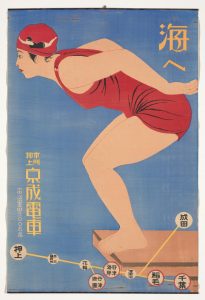 Another promotional poster for the new train networks, this piece to the sea, showcases a female diver as the symbol of forward momentum. Leaning forward, ready to jump forward, concentrating and confident, the woman in the poster is presented as independent and strong. The poster is a woodblock print, and combines traditional lines, shapes, and shading with Art Deco fashion and typography. The network of stations appear below and the link between increasing mobility and female freedom cannot be overstated. Diving into the future, literally. 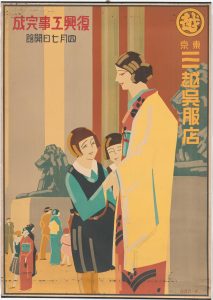 By and large the advent of ready-made-fashion and the expansion of accessible consumer goods aided in liberating women from the home. Over the course of the 20th century new technology began to distance women from domestic duties.  As time spent performing cumbersome tasks such as a sewing, doing laundry, and cooking decreased women began to find more time to pursue other activities. The development of the ready-made fashion store,  the invention of the washing machine, and the popularisation of convenience foods had a significant impact on the acceleration of women’s liberation by simply freeing up their time. These industries also provided increasingly employment opportunities for women. This poster for the Tokyo department store Mitsukoshi- which is still operating today- depicts both female employees and customers, normalising the notion of working women.

Japanese Modernism is showing until October, and the best part is, it’s completely free.