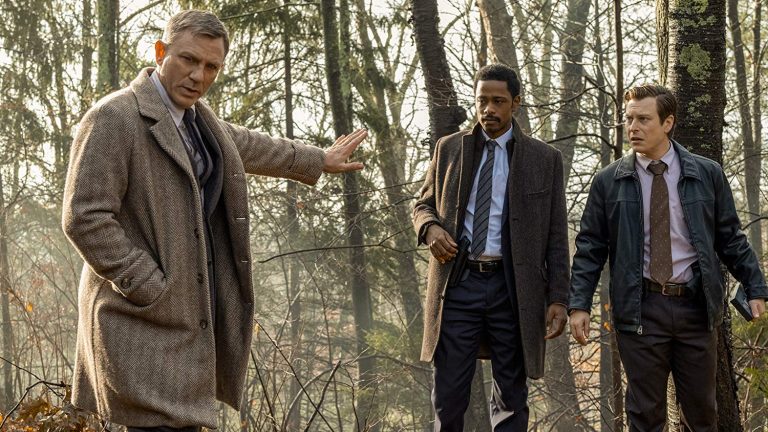 Queen of the murder mystery Agatha Christie once said, “Crime is terribly revealing.” Whether director Rian Johnson had heard this quote before or never knew it existed, it perfectly articulates what his film aims to portray. In the style of a classic whodunit, Knives Out creates an engaging mystery full of twists and turns while simultaneously reflecting on the dividing nature of politics.

After his 85th birthday party, Harlan Thrombey (Christopher Plummer) is found dead in his mansion. The death of the prolific crime novelist – who is leaving behind an immense fortune – is not as straight forward as presumed. Enlisted to investigate the case, detective Benoit Blanc (Daniel Craig) must traverse through a web of lies from families members who all have motives for axing the patriarch of the Thrombey family.

Round of applause to the casting director Mary Vernieu for putting together an ensemble cast that does not disappoint. Johnson utilises all the actors to their fullest potential. Daniel Craig and Chris Evans prove they are not franchise-bound with great performances. That being said, both are overshadowed by Ana de Armas and Toni Collette who continue their hot streaks. Regardless of his short time on screen, Christopher Plummer is also a delight and really makes the most with the time he has.

It is not easy to write a murder mystery. To keep an audience guessing who the killer is right until the very end is challenging. On top of that, the ending has to be satisfying so the viewers do not feel cheated. Hardest of all is making them care once the answers are unravelled. Knives Out has no issue juggling those; in fact, it makes it look easy. Johnson seamlessly mixes the classic tropes of a whodunit with modern concerns particularly in regard to – but certainly not limited to – identity and immigration.

To avoid spoiling the incredibly intricate story, generalisations will have to be made; the upcoming opinions will unfortunately lack context, but it is integral for first-time viewers. While still humorous and enjoyable, the second act of the film feels underwhelming. It is not bad or unnecessary (far from it), it just moves away from the complex world of the Thrombey household which is so enthralling. However, when the end does come, these doubts are washed away immediately as the story unravels and gives act two more purpose.

Technically, this film had to be on-point. The audience needs visual clues as much as spoken to truly justify the ending. Do not fret, it fires on all cylinders. The camera provides the viewer with many clues which will be missed on a first watch but enjoyable to spot on a second. Framing of the family around the house shows how close they are making the audience realise why they are so dysfunctional. It just goes to show how much thought Johnson and cinematographer Steve Yedlin put in during filming.

Locations are stunning and the camera has no problem picking them up. The Thrombey mansion looks as if someone shook the house out of the Cluedo boardgame. It is gorgeous enough to distract from all the hidden passage ways and outdated features. Not to mention the fantastic art pieces and props (especially the fan of knives which is just simply magnificent).

In Johnson we trust. If you think the story is going somewhere it should not, he shows you why he went there. He knows the murder mystery genre profoundly enough to pay homage and, at the same time, parody it while also including social commentary in a fresh and exciting way. This is his film which is elevated by incredible performances, lavish sets, beautiful cinematography and an unbeatable story. With its poignant message, Knives Out is a bloody brilliant modern whodunit that will also leave you in stiches.

Knives Out is currently screening in cinemas nationwide.