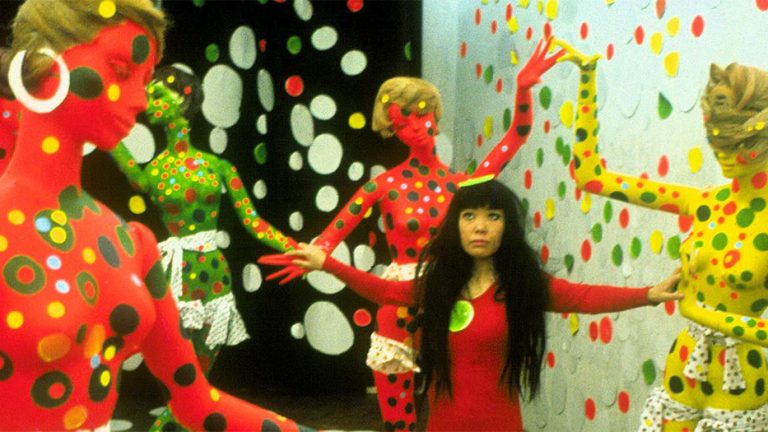 [Content Warning: Mental illness, discussion of suicidal thoughts and suicide. If this brings up any negative feelings or thoughts please call Lifeline on 13 11 14.]

Kusama – Infinity is a love letter to an artist who was determined to succeed in a world that had no place for her. Many Melbournians were introduced to Yayoi Kusama in the recent NGV Triennial, where her Flower Obsession 2017 invited viewers to cover an apartment in bright red fake flowers. While Kusama is arguable now the most successful living female artist, Director Heather Lenz breaks down exactly how hard won that title is.

The film is told in relatively chronological order, from the now nearly 90-year-old woman back to her childhood in 1930s Japan. This way, the film allows the viewer to grasp the sheer monument that is her life and career. Not just the stereotypical image of a strange frail recluse.

It details her move to New York City at the end of the 1950s and how she would utilise her oddity as a “cute” Asian woman in a world of white men. This very pragmatic attitude and an eye for spectacle and provocation, served her well during the 1960s but was also used against her over the course of art history.

While this may be a love letter it doesn’t romanticise or sanitise Kusama. In fact, it revels in her aggression, her bold ambition, her difficult personality and her struggle with her mental health.

Her romantic relationship with Joseph Cornell is placed outside of chronological order, which lessens its significance. This moves away from the common romanticised reading of her return to Japan in the 1970s as an act of mourning for his passing. It keeps the focus squarely on Kusama as she tried to navigate changing political and social ideals.

While the subject matter is serious, it is never dull, and moments of hilarity often come from interviews with the older Kusama. Her deadpan delivery of, “Why can’t I sell my work like ice creams or hotdogs?” In reference to her gate crashing and selling her work outside the 1966 Venice Biennale is a highlight.

Lenz uses layered footage and still images with clever editing to create emotive visual imaginings of the mental breaks, hallucinations and events that occurred throughout Kusama’s life. These elements allow the viewer to fall into the story and evoke the struggles that Kusama went through.

Close ups and tracking shots of Kusama at work in her studio utilise excellent lens work. The focusing and un-focussing of the lens allows the patterns and textures of her work to bend, merge and change, simulating the hallucinations and sense of obliteration that is a key tenant of Kusama’s work.A carefully considered music score is the emotional backbone of the film as it sews the montaged visual elements together. Although at times it was a bit manipulative.

The documentary is narrated by many different voices: archival interviews; segments of her film work; newly filmed interviews with Kusama, art historians and friends. This allows the viewer to gain a multifaceted view of Kusama. It isn’t necessarily more objective compared to documentaries that are narrated by the director, but it is a richer and more nuanced experience.

The film asks the audience to re-assess history, to think of all the outcast innovators who were (and still are) ripped off and cast aside in favour of their more palatable white male contemporaries. It is not trying to re-write history but asks that it is critically engaged with, rather than read as it was written by the victors.