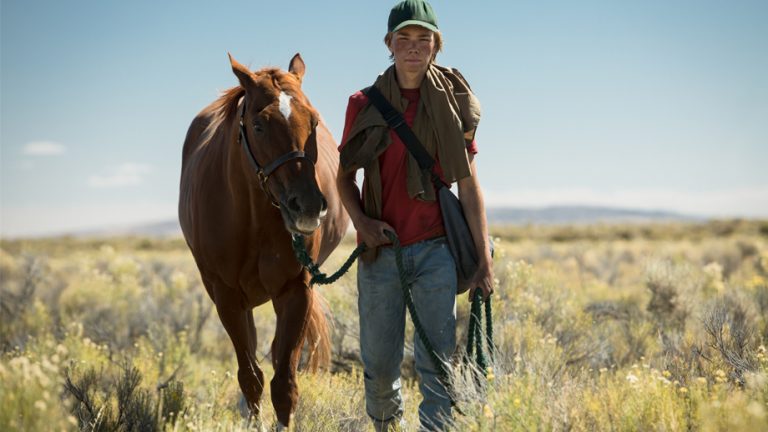 My childhood was largely spent watching movies about horses and the bonds that young kids and teenagers can form with them. In this sense, director Andrew Haigh’s new film Lean on Pete was a nostalgic and emotional tale.

Lean on Pete is a story about loss, belonging, friendship and survival. It centres around fifteen-year-old Charley (Charlie Plummer) who finds a job at the local racetrack mucking out stalls and walking horses to help support himself and his alcoholic father (Travis Fimmel). Del (Steve Buscemi), a dodgy and long-time struggling trainer, takes Charley under his wing and uses his laidback, semi-successful horse Lean on Pete (or simply ‘Pete’) to teach Charley how to handle horses.

The horses in this film are phenomenal and really stole the show. At times angelically docile, at others playful, loving or even distressed and frightened, the equine actors portrayed each emotion in a way that gives immense credit to the talent of the film’s animal trainers (Lauren Henry and Roland Sonnenburg).

Soon after Charley settles into his job, his father is beaten up and sent to hospital with life-threatening injuries, leaving Charley completely alone. Charley finds some sense of belonging and friendship from Pete, Del, and Pete’s occasional jockey, Bonnie (Chloë Sevigny). Already, however, Charley’s life is drifting in a downward direction, and when his father passes away, it hits rock-bottom.

Suddenly, Charley has no one to care for him except for his Aunt Margy (Alison Elliott), whom he hasn’t seen for years and has no way to contact, other than knowing she used to live in Wyoming. When Del decides to sell Pete following the horse’s loss in a race, Charley can’t bear to lose his closest friend. So, Charley loads Pete into Del’s trailer and steals the horse, planning to drive to Wyoming where they could live happily ever after with his Aunt.

Along the way, things don’t go to plan – which is to be expected when a fifteen-year-old is towing a horse trailer and only has enough money for a small amount of gas, let alone food. The trailer eventually breaks down, leaving Charley and Pete to set off on foot through the outback.

The story is told exclusively through Charley’s eyes, which puts the audience right into Charley’s shoes. It would have been interesting, however, to see the reactions of Del, Bonnie and others that Charley disappeared from because without this side of the story, Charley’s actions seem insignificant and without-consequence.

This film is largely about friendship and one of the best parts of the tale is the exploration of both human-to-human and human-to-animal relationships. On Charley and Pete’s trek through the wilderness, the few people he bumps into are helpful and generous, providing the pair with food, water, shelter and a phone until they move on. This aspect of the film gives a sense of hopefulness and optimism that the majority of people in the world are kind and caring.

Beyond this, the film makes all its characters likeable despite their flaws – whether it be Charley’s father with his addiction troubles, or Del with his illegal training methods and occasionally irritable personality. This is aided by the acting quality, with the cast creating complex, relatable characters who conveyed the troubles and emotions behind their behaviour with ease. The filmmaking techniques were subtle, allowing the actors and scenery to tell the story without manipulation.

Plummer is great in the role of Charley, in spite of it often calling for minimal dialogue. On the surface this can seem dull to watch, however it reflects the experiences the boy has been through and they way hardship and isolation have changed his personality.

Lean on Pete is a rollercoaster ride of emotions. The story is slightly unbelievable, but by having a young protagonist it allows viewers to draw on their youthful imagination and belief to connect with the film. The story has plot twists at every corner that keep it interesting and is, beyond anything else, a beautiful representation of the power of horses.

Lean on Pete will be released in select cinemas from November 29th.