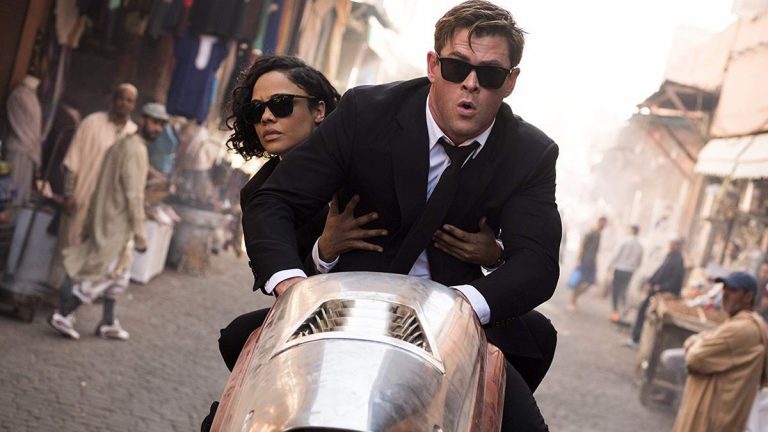 To call Men In Black: International (2019) a disappointment would be an understatement. In its runtime of just under two hours, this sequel fails to capture the essence that made the original Men In Black (1997) film so endearing – there was nothing like it at the time. When viewed in the current scheme of all things sci-fi blockbusters, F. Gary Gray’s recent addition to a once exciting brand lands with a thud and fails to provide an experience worth lauding. The result is a hodgepodge of ideas stretching beyond comprehension in a film that doesn’t really know what it is hoping to achieve, with a great cast that is caught up in the thick of it.

Like with Will Smith’s Agent J, Tessa Thompson’s Agent M is the new rookie on the block. After an encounter with an alien as a child, M hopes to find the Men In Black who neuraylzed her parents; she manages to do so in her later adult life, and is brought into their training system for a probationary period by the returning Agent O (Emma Thompson). Agent O then sends her off to MIB’s London base where she meets the big boss of the division, High T (Liam Neeson) and the division’s number one agent, H (Chris Hemsworth). From here, H takes M under his wing as the two set off on a task that doesn’t go to plan, and they become thrust into a series of goose chases –  involving various encounters with aliens of all kinds – as they realise a mole has infiltrated the Men In Black.

For all it is worth, it is easy to see why Chris Hemsworth and Tessa Thompson were brought in for this reboot. Their collaboration and chemistry from Thor: Ragnarok (2017) is perhaps the only redeeming quality in this film, which is thwarted by dreary set pieces and dialogue for dialogue’s sake. However, even that chemistry was toned down in this action-comedy as the duo are left to scavenge for any glimmers of richness in the sub-par material at their disposal. A lot of the time, this results in moments where humour is tried to be drawn out of the back-and-forth exchanges between the two, but to no avail. That’s a bit disheartening considering that the central relationship between the two leads, and their ability to seamlessly bounce off of each other when required, has always been at the forefront of the success of these films.

Will Smith and Tommy Lee Jones brought with them two distinct personalities that were able to complement each other, with Smith’s upbeat persona and Lee’s more controlled voice of reason. Hemsworth and Thompson’s relationship works in a similar vein as the two have a certain charisma that makes for a worthy successor to Smith and Lee. Unfortunately, they are (like Kumail Nanjiani’s alien character Pawny) pawns in this boring game of chess that suppresses them in favour of nonsensical storytelling. Filling the boots of the original duo would have proven a difficult task for anyone cast in any future instalment of MIB, and fortunately enough, there are no attempts to imitate or try to recapture the glory that came with that on-screen relationship. Equally so, there are no attempts to innovate in such a way that would warrant further investment in this brand.

MIB International is a film that serves to remind its audience of just how much they enjoyed the original and that can be best felt in the homages to, and iconography of, the original. From the talking worm guys to certain visual references in the films mise-en-scene and right through to Emma Thompson’s own character, there is a surge of call-backs that stand on their own and reduce the newer aliens to forgetful fragments, in forgetful scenes, in a forgetful film. There was also always a certain etiquette present in the secret society of the Men In Black which kept them an exclusive and tightly bunched group. That then paved the way for the likes of the Kingsman (2014, 2017) films which were loosely inspired on this idea, but it is whitewashed here with a tasteless screenplay that lacks the flare of the original and leaves the secret society feeling less secret.

This screenplay is filled to the brim with jargon and fails to properly establish any ideas raised in the opening sequence, leaving any hope of understanding the expository first act all but gone. From the vagueness of the distant battles fought with a threat known simply as “The Hive”, to the coarseness of side-characters, right through to the relevance of arms dealer Riza (Rebecca Ferguson) – there is too much going on for comprehension. MIB International tries to do too much with too little time and raises more questions than answers, like with H’s whole troubled character arc. This arc is even more abruptly resolved in the film’s climax, which is concluded within five minutes as the film races towards its closing sequence.

To cap this all off, there are futile attempts to incorporate any feminist undertones and they are mainly directed towards the title by which the franchise is based upon. The phrases “Women in Black” and the “Men and Women in Black” are thrown around to remind audiences of just how uninspired the writing in this film is, to the point where it has to resort to incongruous political angles that are poorly handled. If that doesn’t cut it, more tonal shifts come about in the form of a Lexus commercial, of sorts, that tries to sell a high-performance supercar – something that is probably the one achievement that will come from this film.

If the once successful trajectory of the MIB brand has slowly disintegrated, it’s because there seems to be no direction present whatsoever. Perhaps now’s the perfect time to be neuraylzed.

Men In Black: International is currently screening in cinemas nationwide.