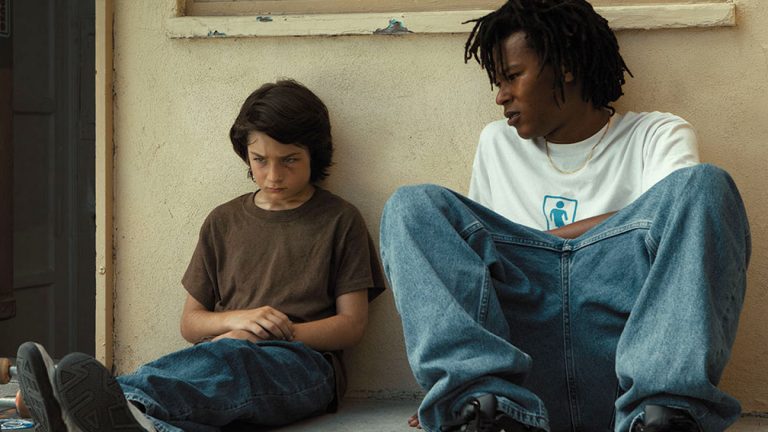 The motion picture, as an artform, has the dual role of both reflecting the society that audiences live in, and showing the cultures they otherwise wouldn’t see. This coming-of-age tale – which also marks the directorial debut of Jonah Hill – fulfils said role, but also has the distinction of making the viewer feel quite uncomfortable.

As its title overtly suggests, the plot of Mid90s takes place in the middle of the decade colloquially known as the Nineties, and follows Stevie (Sunny Suljic), a boy who lives in the greater Los Angeles area with his abusive brother Ian (Lucas Hedges) and absent mother Dabney (Katherine Waterson, Fantastic Beasts). Stevie has no friends of his own, but finds himself drawn to a small group of skateboarders who hang-out in the nearby shopping precinct.

After gingerly loitering in the skateboard store they work at, Stevie gains the courage to approach the four teenagers, who readily accept him as part of their group and christen him with the nickname “Sunburn”. As Stevie vies for the affections of his new friends, he partakes in one risky activity after another, including trespassing on private property, performing dangerous stunts on his skateboard, consuming illicit substances and being romantically involved with Estee (Alexa Demie).

From the outset, Mid90s looks to be a nostalgic observation of the same era – one of the earliest scenes has Stevie playing a Super Nintendo console with the F-Zero soundtrack clearly audible; not long after, Stevie’s family dine at a Chinese restaurant with Seal’s “Kiss From A Rose” playing in the background – but this is not the case for the whole film. In actuality, Mid90s is more interested in the subculture that skateboarding fostered, and how young people shaped said subculture.

Often considered an activity for deviants and social outcasts, Mid90s provides a more favourable, romanticised look at skateboarding, noting how it brings people joy and brings them together. This is especially evident in Stevie’s ragtag group of friends – played by Na-Kel Smith, Olan Prenatt, Ryder McLaughlin and Gio Galicia – who take great delight in seeing each other land tricks, socialising with their fellow skateboarders, and filming their activities on a camcorder.

Typically, when a coming-of-age story has a younger protagonist befriending older teenagers, the latter group will take advantage of their new acquaintance, or berate them endlessly. Mid90s opts to defy this cliché, with Stevie’s pals instead being supportive, almost paternal figures to the youngster, appearing to show genuine concern for his welfare and even remorse for his misfortune. With that said, the four friends are far from ideal mentors, often engaging in shady, morally dubious activities.

Said activities are often emulated by the underage Stevie, whose death-defying behaviour provokes worry not just from those around him, but the viewer too. In fact, there are several instances Stevie is involved in that could be described as confronting or disgusting, with the most infamous of all being a make-out session with a girl who is clearly much older than he is – although the film tries to play it off as charming and innocent, this reviewer couldn’t help but feel repulsed by the scene.

Troublesome moments like these are certainly off-putting, but they don’t make Mid90s an inherently unpleasant experience, for there is plenty more to appreciate. An additional element that pleases is the old-school cinematography, which appears to be shot on negatives – it’s coarse, granular, and has specks overtly visible. Furthermore, the entire film is quaintly framed in a 4:3 ratio, otherwise known as “Pan-and-Scan”, which helps to reinforce the picture’s retro aesthetic.

Mid90s works as both a portrait of the period and a heartfelt examination of the skateboarding subculture. There are some moments featuring the thirteen-year-old lead that are distasteful, yet there are equally as many moments with his friends that are quite touching. For these reasons, Mid90s gets a cautious recommendation.