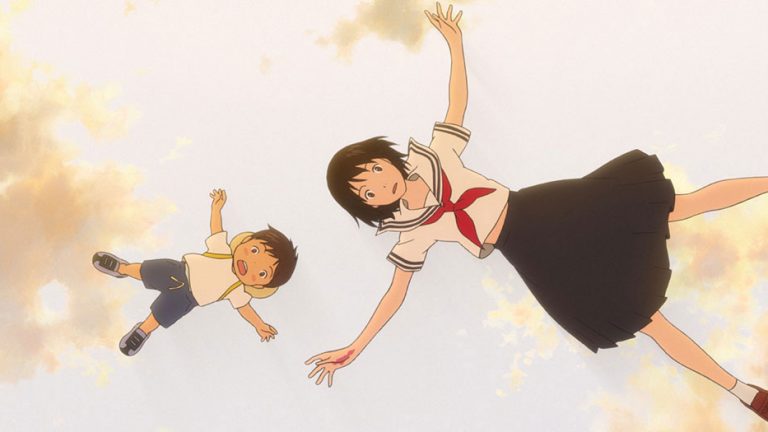 In the medium of animation, it is rare to see a character be part of a nuclear family. Think about it – more often than not, the protagonists of these films are either orphaned, or going solo on an adventure. Only a handful of movies have elected to take a backward step and consider what life is like in a “typical” household, with this anime feature being one of them.

Kun (Moka Kamishiraishi) is who, for the first four years of his life, has known nothing but undivided adoration from his mother (Kumiko Aso) and father (Gen Hoshino). Yet upon the arrival of his baby sister, Kun finds himself struggling to gain the attention of his parents, and he isn’t the only one – in the garden outside his house, Kun is met by a figure calling himself Prince (Mitsuo Yoshihara) who tells a similar story of rejection.

After spending days at home without a name, the baby girl is christened Mirai – the Japanese word for “future” – but lacks any interest in the world around her, least of all Kun’s train collection. Bemoaning his sibling’s lack of enthusiasm, Kun returns to the garden to be greeted by another entity, an older girl (Haru Kuroki) with a distinctive pink birthmark on her right hand. The girl refers to Kun as “big brother”, suggesting that she is Mirai… from the future!

Mirai is the seventh feature-length anime to come from Mamoru Hosoda, a director whose work has drawn comparisons with the legendary Hayao Miyazaki of Spirited Away fame. Hosada’s past films have explored the relationships between a mother and child (Wolf Children) and a son with his fathers (The Boy and the Beast), a motif that is one of several connections to his latest project – another is voice actress Haru Kuroki, who appears in all three films.

What differentiates Mirai from Hosoda’s other releases is its exploration of family life. Rather than focus on a single aspect of Kun’s household, the story seeks to examine the relationships between all family members, be they parents, grandparents, siblings, or even the dog and his masters. What’s more, the story depicts these many relationships between relatives as complex and fragmented, which is reflective of what life in a real family can be like.

This being anime, there is also a fair degree of whimsy to Mirai seldom seen in English-language productions. In earlier parts of the film, Kun’s adventures have a playful innocence to them, a fact which is reflected in composer Masakatsu Takagi’s piano-led soundtrack; later on, the imagery borders on the surreal, with its sequences being potentially frightening for younger viewers. A shame that is too, for there are messages within to which those who are Kun’s age, and siblings especially, should take heed.

One other complaint with Mirai is the way it has written its central protagonist. It is implied, though not explicitly stated, that Kun is on the Autism spectrum – witness his love of trains and dearth of social skills – but has the audience believe he is little more than a spoilt brat. For a movie that spends much of its time sympathising with the adults, Mirai shows little regard or care for Kun’s struggles; perhaps if it had, the viewer might be more compelled to relate to him.

That’s pretty much where the criticisms end for Mirai, for everything else is wonderful. The hand-drawn animation is gorgeous, with bright colours, expressive faces and detailed scenery to be found throughout; the script is rather humorous, making it the most amusing of Hosoda’s films; and the Oscar-worthy songs, written by singer Tatsuro Yamashita, are the perfect way to open and close the film, being nothing but pure earworm.

Mirai is a heart-warming experience bound to delight children, parents and animation fans alike. Not since 2016’s Your Name has an anime film so brilliantly poised itself for mainstream success, being a winning combination of drama, comedy and fantasy. Yet above all, Mirai is a tribute to the joys and tribulations that family life has to offer.

An additional screening of Mirai is happening this Wednesday, August 15th at 6.30pm. For those who can’t make it, fear not – the film will be getting a limited theatrical release from Madman Entertainment on August 23rd.