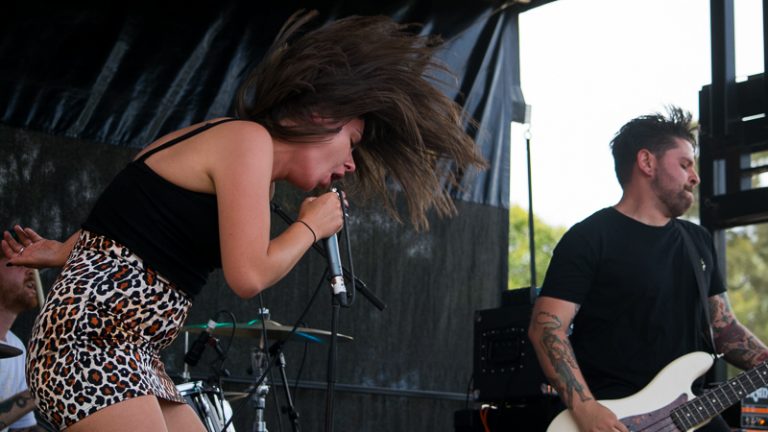 After releasing More Scared Of You Than You Are Of Me and starting the label Pool House Records last year, Melbourne’s inner northern suburbs was the scene the for the inaugural Pool House Party run by rockers The Smith Street Band at the Coburg Velodrome.

Local punk rockers Under The Cut, treated the punters who filed in early to some post punk tunes, getting the crowd up and about to start the day. The first band to hit up the Corner Stage was Newtown three piece Scabz. They came to the stage and branded themselves as “The s***est band in Newtown and Melbourne” which had the crowd intrigued. It was a jam-packed half hour set, with the crowd size increasing after every catchy song played.

Next up on the main stage were Sydney’s Antonia & The Lazy Susans. Very grateful to the fans who came in early they showed off their talent playing there pop punk tunes and showing the crowd why they are ‘ones to watch’ on the Australian music scene. The Sugarcanes came on stage with a strong five piece band along with charismatic lead singer Lucy Wilson. They gave to early crowd goers  a poppy punk dance half hour showcasing they are force to be reckoned in the music scene.

Back on the Corner Stage we got our feel of metal for the day when Pagan came on stage and produced one of the fiery sets of the day led by their fiery lead singer Nikki Brumen. Showing off her strong screaming vocals, they rocked out giving us a taste of their forthcoming coming album. Press Club entered the main stage of the back of the release of their debut album Late Teens, and did not disappoint. The local rockers with front woman Natalie Foster showed their talents by giving the crowd an action packed set playing hits off the debut album. They also were very interactive with the crowd witch has us in their palm of their hands. Proving the festival runners has a great taste in music.

Arnhem Land’s Baker Boy made his presence felt when he took to Corner Stage as the first Hip Hop artist of the day. Hands were up in the air immediately when he opened with his version of Yothu Yindi’s classic Treaty, letting the dance party continue with  hits Cloud 9 and Marryuna. Baker Boy proved that this 21 year old is one of the biggest talents in the country. Ecca Vandal took the stage next and gave the crowd a set not to forget, showing off their electronic punk rock beats with plenty of energy and giving the punters plenty of reason to rock out and have a dance.

As the sun begun set over the Velodrome and the evening commenced The Bennies came on stage and were hyped up and energised from the first second of their set. They opened up with Heavy Disco, which had us dancing. This would continue throughout their set playing their hits and songs from their 2017 album Natural Born Chillers. Once the sun had set, it was time for the big guns to come out with Fremantle’s own Tired Lion entered the stage. They gave us a bumper 40 minute rock set, playing hits from there 2017 album Dumb Days. Even with some crowd issues they truly are a band that deserve the time slot before the main act.

It was finally time for the main act of the evening we had a few vocal warm up tunes by the DJ who played in between sets, to prepare our lungs for the screaming and shouting that was sure to occur. When Melbourne sweethearts and festival organisers The Smith Street Band graced the Velodrome stage and burst out a set and that had the punters jumping around and signing every word along with dynamic front man Wil Wagner. They gave us a whole range of songs coming across all 4 albums, closing out with their 2014 hit I Love Life bringing most of the artists from the day to have a dance with them. They truly showed us how The Smith Street Band is one of the biggest rock bands in Australia.

As the night came to an end we all sweaty a little dusty from the venue and our voices very raspy every punter left very happy about the afternoons events. The Pool House Party truly showed how far The Smith Street Band has come over the last five years. Giving us the most gender diverse line-up for a festival we have ever seen, this festival was almost more about women in music than it was just seeing The Smith Street Band. The party was a success and hopefully we will see more festivals like this in the future.