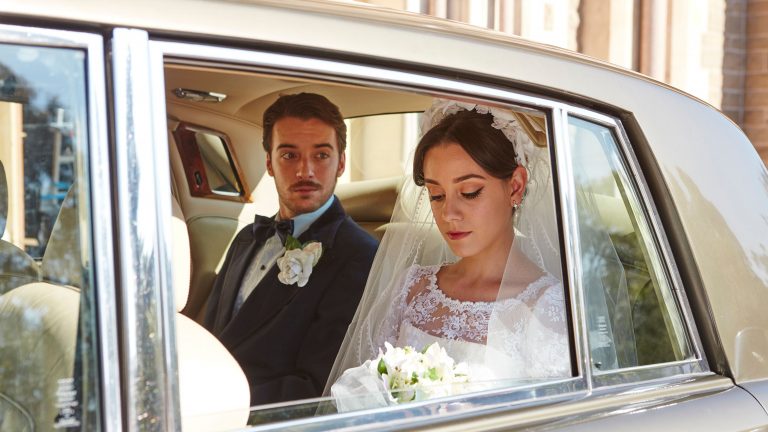 If feel-good comedies were a commodity, Australia would be the richest country on Earth. Each year brings with it a multitude of these releases, all vying to capture the hearts and minds of an adoring Australian public. It’s an achievement this film is unlikely to replicate, being devoid of what makes its contemporaries special.

Since she was an infant, Angela (Antoniette Iesue) has been betrothed to Robert (Daniel Berini) via a pact between their respective fathers known as “Combinare” – a custom from their homeland of Italy. Essentially, this pact ensures Angela and Robert will marry each other regardless of their circumstances or wishes. This unfortunately means that Angela is forbidden from dating her crush Tom (Santo Tripodi), a situation which saddens them both.

Initial impressions suggest that Promised looks to be echoing the spirit of Alex & Eve and Ali’s Wedding, an Australian rom-com centred around nuptials between two unlikely lovers from a migrant community. On this occasion it’s the Italian community being represented, one of the more visible groups in society and, judging by what happens in Promised, one of the most boring too.

As somebody with practically no ethnic heritage, this reviewer was hoping to learn more about Italian culture, or perhaps see an aspect of it generally hidden from public view; Promised offers no such insights, appearing only to have the most simplistic understanding of their customs. What’s most baffling about this fact is that writer-director Nick Conidi is himself of Italian descent, and therefore should be in a better position than most to showcase said culture.

Equally baffling is how charmless Promised is. Conidi’s direction lacks flair and style, providing little to differentiate himself from his competition, and even less to hold the viewer’s attention; the characters are all bland, with no traits to identify or distinguish them from each other; and on the few instances where a joke does appear, it barely elicits a smirk – rather ironic, considering this is a romantic-comedy.

In fairness, one could argue that Promised is the debut feature of Conidi, so it would be rather unrealistic to expect a film such as this one to be a masterpiece. While there is virtue in this argument, there are countless examples of directors that have defied this logic, such as P.J. Hogan, who made his debut with Muriel’s Wedding; Wayne Blair, who helmed The Sapphires and followed it up with Top End Wedding; and Baz Luhrmann, who stunned the world with Strictly Ballroom.

Speaking of Strictly Ballroom, its star Paul Mercurio earns top-billing in Promised by elevating proceedings (if ever so slightly) as Angela’s father, Sal. Like everybody else, his protagonist is quite bland, but Mercurio puts a fair amount of effort into his performance, which is heart-warming to see. Alongside him is pop-singer Tina Arena as wife Rosalba, making her acting debut and proving a welcome presence.

Mercurio and Arena are the only familiar names to be found in Promised, with the remaining players being amateurs with limited acting experience. Admirably, Conidi has selected a majority Italian-Australian cast for his debut feature, all of whom perform decently yet can never overcome how dull their characters are. As a consequence, none of them are ever likely to leave an indelible impact on the viewer.

Devoid of energy, warmth, quirkiness and – to quote a certain other Australian comedy – “the vibe” that is archetypical of its brethren, Promised fails to meet even the most basic of expectations. An admittedly likeable cast does what it can to save the movie, but even then, Nick Conidi’s feature is unlikely to become a perennial classic.

Promised will be screening in Australian theatres from October 24th.