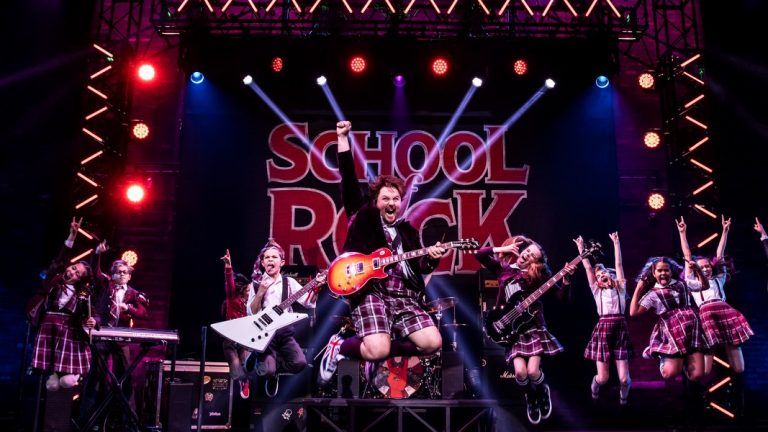 With a phenomenal cast of young performers, the future of the Australian musical theatre industry is in safe hands.

On Friday the 9th of November, Andrew Lloyd Webber’s School of Rock: The Musical opened at Her Majesty’s Theatre in Melbourne to a very nearly full house. The red carpet adorned the footpath outside the regal venue and upon it, theatre and entertainment royalty made their way past the paparazzi frenzy, including the likes of Rhonda Burchmore, Lucy Durack, Joel Creasey and Jack Post.

With a box-office line that felt longer than the first act itself, the show, bound for a 7.00pm start, commenced late. But as soon as the seats were filled and the lights were dimmed, it was clear that the cast was buzzing and the audience was ready to invest themselves and become (verbally) involved.

School of Rock, originally a popular film starring Jack Black, tells the story of a sloppy, failed musician Dewey (Brent Hill) who, without an income, and bills to pay, impersonates his best friend Ned (John O’Hara), to be hired as a substitute teacher at prim and proper-posh Horace Green school. When the hungover, washed up musician discovers the classical musical talents of his students, he goes about attempting to instil in them a passion for rock. As is expected, chaos ensues, but so do life lessons for the kids, their parents and teachers.

From the outset, it was evident that with over 300 speakers installed in the theatre, this musical was going to have incredible sound quality (courtesy of Adam Fisher, the Associate Sound Designer). And it did. With a cast primarily comprised of extraordinarily talented actors, singers and musicians, under the age of 15 years, they deserved nothing less.

The show has three rotational casts of kids throughout this Melbourne season and as far as I’m concerned, they all deserve honourable mentions. But alas, I’m restricted by word count and thus, need to at least mention the opening night stars. Orlando Schwerdt as Lawrence tore it up on the keys, Jayden Tatasciore as Zach hopped all over the stage, his full size guitar dwarfing him while he owned the instrument with poise and certainty. Samantha Zhang as Katie was on bass and was sassy and filled with attitude whilst Freddy, played by Kempton Maloney was a standout for me, as his drumming was not only well beyond his years, but his entire involvement in the character had me captivated, and wondering if we were looking at a future Broadway (or rock?) star.

Another highlight was Lenny Thomas who, as Billy, strutted the stage with so much confidence, passion and sass as the class costume designer that if Alexander McQueen was hiring, based on Thomas’ acting, I would be convinced that he would be a suitable candidate.

At the commencement of the show, a voice-over of Lloyd-Webber himself assures the audience that the children are all playing their instruments live. This point seems null and void until the audience is hit with the quality of their playing and you find yourself leaning in closer because ‘surely, that can’t be right!’ They were phenomenal.

Brent Hill, as Dewey, was also outstanding in his role, which was very physically demanding, manipulating his voice between the genres of rock and musical theatre as well as playing guitar live. With so much time on stage with solely the child cast, it was clear that he had gone above and beyond to form rapports with each of the kids, and this was reflected on stage. The entire cast deserved the standing ovation that came at the conclusion of the show.

Andrew Lloyd Webber’s catchy tunes brought his musical style into the present day and lyricist Glen Slater aided in ensuring audiences went home mouthing or belting out the tracks. Highpoints were the captivating numbers “Stick It To The Man” and the adorably endearing “If Only You Would Listen” sung by a chorus of young voices. If I’m honest, any time that the kids were on stage, I was mesmerised.

The set, by Associate Set Designer, Will Fricker, and Associate Scenic Designer, Jeremy Foil, was well-manipulated for creating different spaces on stage. A few standouts were the spinning arches of the Horace Green halls, the classroom and its desks, which doubled as platforms on which the children stood to create levels, and the dive bar Dewey and principal Rosalie Mullins (Amy Lehpamer) visit. It had a hugely appealing aesthetic and coupled with the bold lighting design (Natasha Katz), brought another dimension to the stage space. The choreography (JoAnn M Hunter) was sharp and fun and you could tell the cast loved being up there.

It was great to see a modern musical with pop culture and local references present (book by Julian Fellowes) as it really does make this show appealing to a crowd of all ages. I think an Australian audience will always find a joke at the expense of a certain ex-Prime Minister, and his budgie smugglers, funny.

This feel-good, crowd-pleasing show had the audiences smiling from ear to ear and is worth the time to see some of Australia’s most-talented young musicians and performers hit the stage, with attitude.