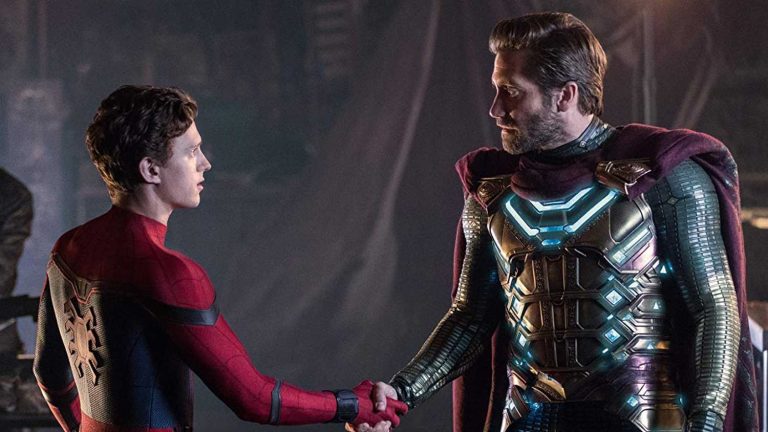 Perhaps the most difficult task one can ever undertake is producing the sequel to a perfect movie. Some have come close to replicating that success; countless more have failed oh-so-spectacularly. Here’s an example from Marvel Studios that falls somewhere in the middle, being better in some respects, but otherwise struggling to equal its previous triumph.

Some weeks after the end of a cataclysmic event known as “The Blip”, Peter Parker (Tom Holland) is preparing to leave his duties as a friendly neighbourhood Spider-Man behind and embark on an overseas field-trip. The vacation is being organised by Midtown High School, and will see Peter spend a fortnight touring Europe with his classmates, including best friend Ned (Jacob Batalon) and crush Michelle, or “M.J.” (Zendaya).

Midtown’s European tour begins in Venice where, barely a day into their sojourn, a watery beast rises from the canals, attacking buildings and bystanders; Peter is all prepared to quell the liquid monstrosity, until an anonymous figure with mystical powers flies in to save the day. This hitherto unseen superhero immediately draws the admiration of Venetians, and Peter’s peers, who endearingly dub the caped crusader “Mysterio”.

Later that evening, S.H.I.E.L.D. director Nick Fury (Samuel L. Jackson) summons Peter to a temporary base not far from his hotel, where he meets the man responsible for thwarting the fluidic menace: Quentin Beck (Jake Gyllenhaal). It is revealed that Beck has previously encountered such a creature, having witnessed its kind – known as “Elementals” – destroy his home, an alternate version of Earth, before travelling to Peter’s dimension to protect his planet from the same fate.

In addition to proceeding the happenings of Avengers: Endgame – unquestionably the biggest film of 2019 – Far From Home must contend with being a sequel to Spider-Man: Homecoming, which brings with it some very lofty expectations. Homecoming has the hallmarks of a perfect blockbuster, delivering action, drama, comedy, romance, a perfect cast, a tinge of science-fiction and a litany of Eighties throwbacks, all within a touching and intimate script. These traits allowed Homecoming to charm many cinemagoers, including yours truly, who christened it his favourite film of 2017.

Such an accolade cannot be afforded to Far From Home, which fails to outmatch its predecessor in a number of ways. For one, it forsakes the Eighties citations in favour of connecting the Spider-Man franchise with the Marvel Cinematic Universe, making frequent references to previous films and characters in the series; resultingly, much of the charm that was present in Homecoming has been lost, replaced instead with a tone akin to every other Marvel movie.

Another area where Far From Home falls behind is the humour, the quality of which is on-par with that found in Thor: The Dark World. Much like that Marvel misfire, gags are flung at the audience often, yet few of them generate laughter, and even fewer meet the level of hilarity found in Homecoming. At least some comfort can be taken in Far From Home’s light, breezy atmosphere, an attribute that carries over from the previous film, perhaps due to many returning cast members, or involvement of director Jon Watts.

Conventional and familiar though Far From Home may be, there are some improvements to be had over its precursor. The action sequences are more plenteous, with Spidey and Mysterio often using their abilities to battle the elementals; romance is also in abundance, with Peter and M.J. being just one amorous couple; and, at long last, viewers are lucky enough to witness Tom Holland swing along the skyscrapers of Manhattan – this doesn’t occur until the final moments of the film, but it’s worth the wait, as is the cameo that follows.

Those hoping for Spider-Man: Far From Home to be a fresh, lively blockbuster that reinvigorates the superhero genre will be disappointed, for it lacks the key qualities of its prequel. Nonetheless, there is enjoyment to be found in the cast, action and, to a lesser extent, comedy, all of which make the film yet another winner for Marvel Studios.

Spider-Man: Far From Home is currently screening in cinemas nationwide.