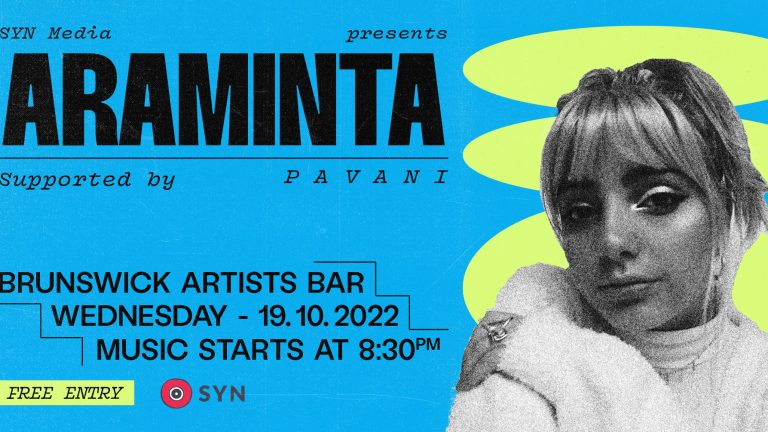 SYN has proven that they’re more than just a leader in youth media and broadcasting last Wednesday, the 19th of October, when they launched their first SYN Sessions – a collaboration with Brunswick Artists’ Bar aiming to bring Melbourne’s youth together and showcase local talent. The first of three monthly gigs, curated by SYN’s Music Department, was met with a great reception, leaving the packed-to-capacity venue mesmerized with the talent of the featured performers.

The first act of the night was P A V A N I, accompanied by guitarist Adyn Young. The duo performed a soft acoustic set, consisting mainly of covers. Choosing to perform covers meant the crowd were able to get to know Pavani and her style, as she added a personal lens to every cover she performed. In a setlist featuring the likes of Radiohead and Lior, she perfectly set the tone for the night, while also showcasing her powerful, yet delicate and warm vocals alongside Adyn’s accompanying guitar work.

Shortly following Pavani’s set, ARAMINTA took the stage, where the crowd that had amassed watched in awe as she powerfully serenaded them and wailed into her microphone. Araminta utilised a stripped back version of her usual live band, with more acoustic based instruments which gave for a more colourful, funkier version of her usual RnB groove and a more vocal forward performance. When she was grooving, the whole venue was grooving with her, but when she belted the more vocal forward songs, the crowd was so captivated at her talent that you could hear a pin drop.

Being the downstairs sister space to the well known and highly regarded Melbourne venue The Brunswick Ballroom, Brunswick Artists’ Bar is the perfect venue for an intimate experience with Melbourne’s local talent. With a venue capacity of between 70-80 patrons, it was uplifting to watch the venue slowly swell as the night progressed and the talent took the stage.

The next SYN Sessions will be held on Wednesday, November 9th, and after this promising launch it isn’t one that you’re going to want to miss!

You can find more about P A V A N I on her Facebook page, and ARAMINTA on Instagram,