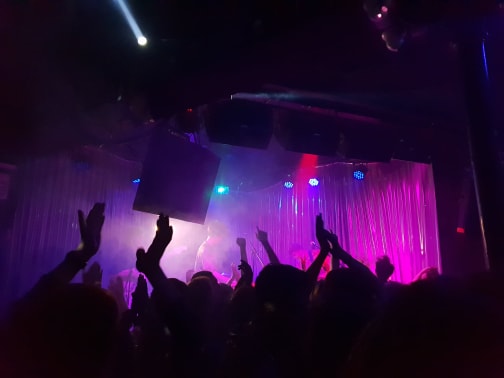 In a small,crowded room these three bands double as your mates, the ‘Message in the Sand Launch Show’ at Yah Yahs was due to be a great night for Melbourne band, Teenage Dads.

Both Polly and the Pockets and Swamp had the difficult task of performing before the headliner was set to start. They both took to the stage with confidence and a visible love for their craft. This was a prime example of why you should always support the supporting acts. Directly preceding the Dads was a Sophisticated Dingo set, which if you haven’t seen them live is akin to walking inside a drive through car wash in the nude. The energy they exude and pump into the crowd is intoxicating and makes for a wild opener. A far cry from a calm before the storm, yet not a single person there dreamt of complaining.

Teenage Dads, all wearing white slacks and tucked in button up shirts that were oh-so-funky, had been leading the charge, dancing in the front row all night. Now that it was their turn on-stage, the crowd was more than ready to make their dad’s proud.

Light and dreamy tracks such as ‘Sleepless Nights’ and ‘Told On’ from their latest album Potpourri Lake sway you off your feet, especially in a smoky room with multiple disco balls (looking at you Yah Yahs). When the mood so quickly shifts with heavier tracks such as ‘Bees’ or ‘Devil’s Jam’, it is impossible to resist dancing the night away.

In truth, no member of Teenage Dads is an actual dad. Yet when Jordan, the lead vocalist, warned everyone to stay safe and look after each other before throwing to a heavier track that aroused an immediate, predictable, response from the crowd, you couldn’t help but see the moniker shine through. Here was a responsible, caring, father-like group that then shredded a storm on stage with an enormous amount of youthful energy. Perhaps this is where the name comes from, but hey, let’s stop asking.

Asking the audience “Who likes Gym Class Heroes?”, Teenage Dads quickly jumped into ‘Cupid’s Chokehold / Breakfast’, a nostalgic anthem that had every single person in the room belting out the chorus, especially the “ba-da-da-da!”.

Message in the Sand was “the reason you’re all here” teased Jordan before they launched into the new track. To say that it was well received would be an understatement, as the entire crowd literally bounced. The energy was a contrast to what is lyrically quite a sad song, but that just exemplifies the support the fans have for Teenage Dads.

In fact, the support was so strong that the band struggled to end the show. Choosing not to opt for a cliché encore, the band had to visibly unplug their instruments in an attempt to quell the roar of “one more song!”. This in itself is an example of how impressive their live show is, and how devoted a fanbase they have cultivated over just a couple of years.

Listing influences such as Pond, The Beach Boys, The Beatles and Devo, to attempt to assign a single genre to these guys would be putting them in a box. This broad spectrum of sound makes for an incredibly fun night because you just don’t know what to expect next. As Melbourne locals it’s just a matter of time before they play a show near you, so go on, do yourself a favour and give your Dads a call.