It isn’t often that Queer films accurately represent Queer experiences. Usually, they are straight-washed, fetishized or oversimplified, so they are accessible to a wider audience. Unsound acts as an exception to the unfortunate tropes that have prevailed Queer cinema over the past few decades. Directed by Ian Watson, Unsound makes its mark on Australian Queer cinema for its realistic and nuanced approach to Queer and hearing impaired representation.

The film follows Noah (Reece Noi), a burnt-out musician, and Finn (Yiana Pandelis), a newly transitioning deaf, trans man, as through a happenstance the two meet and fall in love. The film is a tender, coming of age story and lets it speak for itself. As Noah abandons his English tour, he returns home to his mother in Australia where he meets Finn, the leader of the local deaf club whose clubbing events are driving Noah’s mother insane. In the meeting, Noah learns about following his calling as a musician, and Finn begins to transition further into himself as a man.

This romantic-comedy of a film packs a punch in its hour-and-a-half running time. Watson carefully balances the uncharted waters of transitioning, the implications of being deaf in a hearing world and the intricacies of new love in a coming of age story that is all the more tender. If there is one thing to take away from this film, Watson understands how to make every frame count. The film is emotionally taxing whilst uplifting without having any aspect feel premature, rushed or superficial – a balance that is incredibly difficult to master.

As the film progresses, each relationship introduction feels more intricate than the last. From Noah’s estranged relationship with his mother, who is still clinging to the bitterness of her husband leaving, to Finn’s disconnect with his father as removing his hair marks the final goodbye to his mother – whom his long hair resembles, no one relationship is clear cut. Each holds their own unspoken or unacknowledged yet incredibly obvious conflicts, which shifts in dynamic throughout the film. Ally Burnham has seemingly done the impossible in creating relationships and dynamics that mirror life too well, where I am inclined to believe it’s partially autobiographical.

The intricacies of relationships are brutally shown between Noah and Finn. Whilst Finn is new to transitioning and is learning to understand “what it means to be a man”, his difficulty in expressing himself is what puts a hindrance on him and his relationship with Noah. Whilst there is the physical obstacle of communication between the two as Noah is hearing and Finn is deaf, there lies an emotional obstacle between the two as Finn can’t express himself on his journey. He is given the task of describing feelings that are seemingly indescribable and then communicating them non-verbally to cisgender people. One way in which Burnham thoroughly struck a chord is her use of verbal dialogue within the screenplay – specifically within the characterisation of Finn.

Throughout the whole film, Finn communicates through non-verbal means – Auslan, iPad, writing etc. However, as tensions arise between Noah and Finn, in an attempt to dismiss his own mistakes, Noah positions deafness as the worst thing that could happen, to which Finn verbally condemns the ableist nature of Noah’s comment thus, screaming at him. This scene epitomises the film’s conflict between the hearing and non-hearing community, as Finn bellows in anger “as if the worst thing you can be is hearing impaired.” This brilliant performance by Pandelis not only leaves a dagger in the viewer’s heart, but it also represents on a much larger scale the inner conflicts of the hearing impaired community as whilst they may still be able to non-verbally communicate, they aren’t being listened to – a theme that Finn struggles with frequently throughout the film.

This realistic insight into marginalised communities extends further throughout the film’s representation of transitioning as Finn physically transitions into his true self. One thing to applaud this film for is its inability to shy away from the truth of transitioning. In a demanding performance by Pandelis, the film shows the struggles of binding, packing, starting hormonal therapy and the internalised fear of disappointing others in transitioning. Transitioning isn’t glorified or underrepresented within Unsound. Instead, Watson shows the fear, uncomfortability and the awkwardness as Finn tries to navigate what it means to be his authentic self as a transgender, deaf male. This representation of transitioning proves one thing; this film was not made in isolation. The queer and trans representatives on set throughout the production and post-production process of this film aid to its strength -that even though the film wasn’t directed by a trans individual, there were clearly trans individuals involved.

The heart of the film is shown within one of the later scenes between Noah and Finn in which an intense sense of reality is thrust upon the two. As Noah and Finn rekindle their relationship, their date along the beach truly speaks for a trans experience as it conveys a scenario and feeling that is singular to a being transgender. The two walk to a beach where their eventual sitting on the sand turns into Noah running into the water nude. The joy on Noah’s face as he braces the chilled water is immediately contradicted with the quick cut to Finn sitting on the beach. This moment, as Finn begins to remove his clothes before remembering his binding and packing is so uniquely devastating. This devastation is perpetuated by Watson’s camera choice in which he just sits on Finn. The fear that crosses Finn’s face is so blunt and honest my heart could of split in two right there in the theatre. This reluctance to steer away from the hardships of transitioning is what makes Unsound different and is what makes it remarkable within Australian cinema. The intersection of Finn’s identity as a trans and deaf man is the heart of this film and Watson doesn’t steer away from that any given moment; instead, he uses these hardships to explore Finn and the characters around him – which may be why this film feels so developed given its running time.
Unsound is unlike any other Australian queer film I have seen before. It is so unapologetically authentic in its queerness and the representation of the hearing impaired community. Not one component of this film acts in isolation as each is crafted to complement each other so seamlessly its incredible to think it’s only 90 minutes.  This film is well worth the watch. 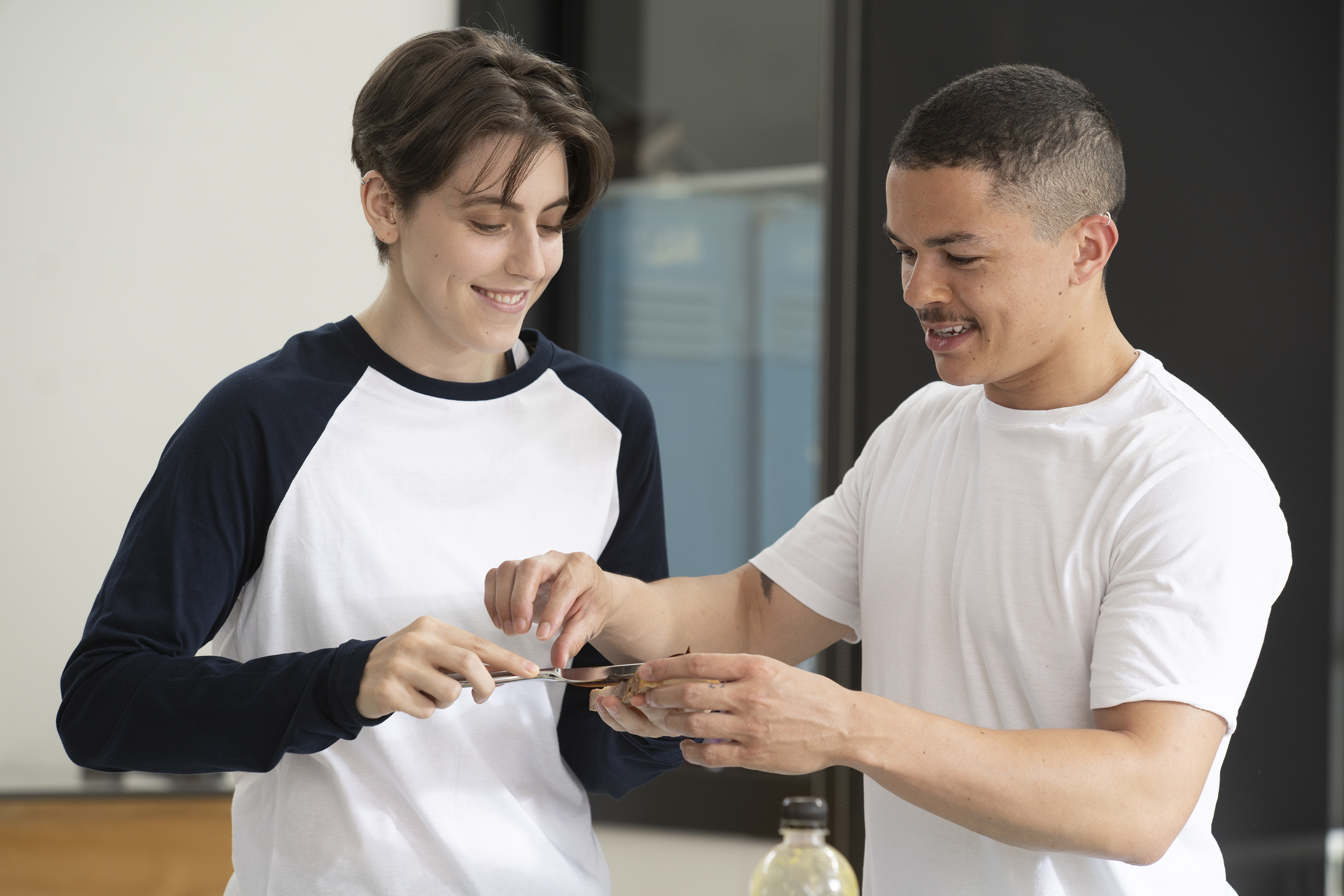