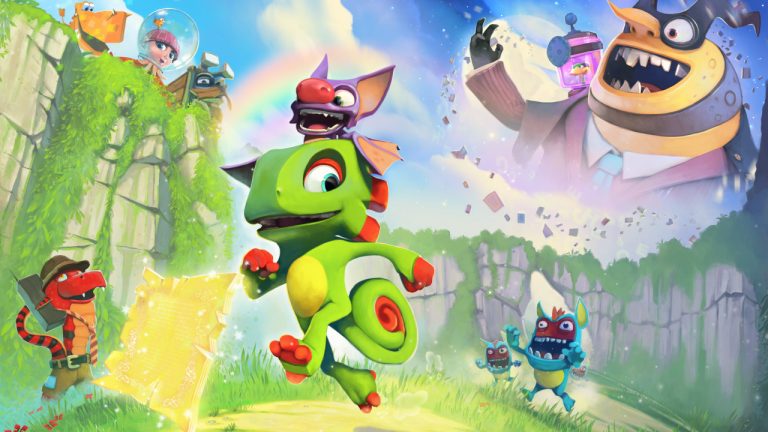 Copy received as reward for financially backing the game on Kickstarter.

I have a love/hate relationship with Yooka Laylee. Truly.

The game was developed by Playtonic Games, a group of developers who used to work for Rare, the company responsible for some of my favourite games growing up, such as Banjo-Kazooie and Diddy Kong Racing. The Banjo-Kazooie property is arguably their most iconic creation, and Yooka-Laylee is a spiritual successor to it.

There was nostalgic value making a game like Yooka-Laylee. Banjo-Kazooie was released in the prime of the 3D mascot platforming genre, which featured titles like Super Mario 64, Crash Bandicoot, Donkey Kong 64, Crash Bandicoot, Spyro the Dragon and Rayman 2. This continued in the next generation with games like Sonic Adventure, Ratchet and Clank and Jak and Daxter. Following that period, very few 3D platformers of note other than Mario have come out, while the 2D platformers have had a revival. This created a thirst for the 3D platforming games that Rare used to create.Those games had their problems that have been ironed out of newer games as 3D space for gaming was quite new.

The story follows Yooka, a chameleon, and Laylee, a bat. Both are controlled by the player simultaneously. The pair must stop the evil capitalist Captain B from stealing the world’s books to create massive profit. I found this funny as trying to profits from books today seems like an idea stuck in the past, and unfortunately Yooka-Laylee also plays around with outdated game design. I haven’t beaten the game (I’ll say why later) but the story is so basic and there is no emotional hook or reason for Yooka and Laylee to go on this adventure, except that Laylee got a cool book stolen. It’s not like in Banjo-Kazooie when Banjo’s sister is kidnapped, or in the sequel when the villain enacts revenge. Do Yooka or Laylee even have any friends? Why should I care if no-one else does?

I did enjoy the character design. Yooka and Laylee are very simple but I liked them. Trowser the red snake who is also a capitalist I thought was very cool. Many of the other characters are either animals or inanimate objects with eyes. This was faithful to the Banjo-Kazooie games.

Gameplay is very similar to Banjo-Kazooie and its sequel, Banjo-Tooie. There’s a main hub world that contains Grand Tomes. The Grand Tomes warp Yooka and Laylee to large open-world levels to explore for collectibles. The most important of these collectibles are “Pagies”, which are golden book pages that are earned through completing puzzles and challenges. Collecting more Pagies allows players to expand worlds as well as unlock more of them, and then eventually take on the final boss. Another collectible is the quills that are used as a currency to unlock new moves for the protagonists to take on new challenges.

Many of these challenges are unique to the world, while others are included in all of them, such as the minecart challenge, arcade-style mini-games and collecting all of a particular collectible in that world, such as all 200 of the aforementioned quills.

I was surprised with the large number of unique challenges Playtonic came up with, but as you can imagine, while there was some great ones there was also some duds. I hated the minecraft stages because they were poorly designed and not fun.

I spent the first few hours of this game expressing more frustration than joy. I got used to the clunky controls eventually, but I never stopped getting annoyed at the dreadful camera. Thankfully, a future free update will address the camera.

Also, another problem with the old 3D platformers is the precision jumping onto platforms. This was phased out of these games because in 3D precision platforming is difficult. It was annoying seeing this return in Yooka-Laylee. Each world allows a character named Dr Puzz who can transform our heroes into other forms such as a flower, a helicopter and a school of carnivorous piranhas. One world had a snow plow, which didn’t control very well, and one challenge involved precision platforming. Imagine trying to make precise jumps with wheels, and an awful camera to boot.

The other issues I had is with the outdated checkpoint and save systems. The worlds are fairly large, so having to go all the way back to where you were after being sent back to the start is frustrating. The save system had me on edge the whole time as you can’t save at any time, but it autosaves at certain points, such as when you get a Pagie or leaving the world…at least allegedly. I’m not sure whether to blame the Xbox One or the game, but I lost more than half my progress after my “suspended” game on the console seemed to reset itself. This is strange because surely the game had auto-saved after each Pagie? Either way I’m very annoyed because I was very close to the final boss, and there are very few games I would grind through again.

The game also fails to tell you a bunch of stuff, like that there is a first-person view when shooting projectiles. Without this knowledge I had to complete a challenge by awkwardly moving Yooka in the right spot to shoot.

The worlds themselves are interesting, but I would have preferred more variety. If the worlds were a bit smaller perhaps but have more of them. The game was of course funded by fans on Kickstarter, and those limited funds show. The hub world is terrible and furstrating; the path to the next world is rarely clear cut and can best be found by walking about aimlessly. 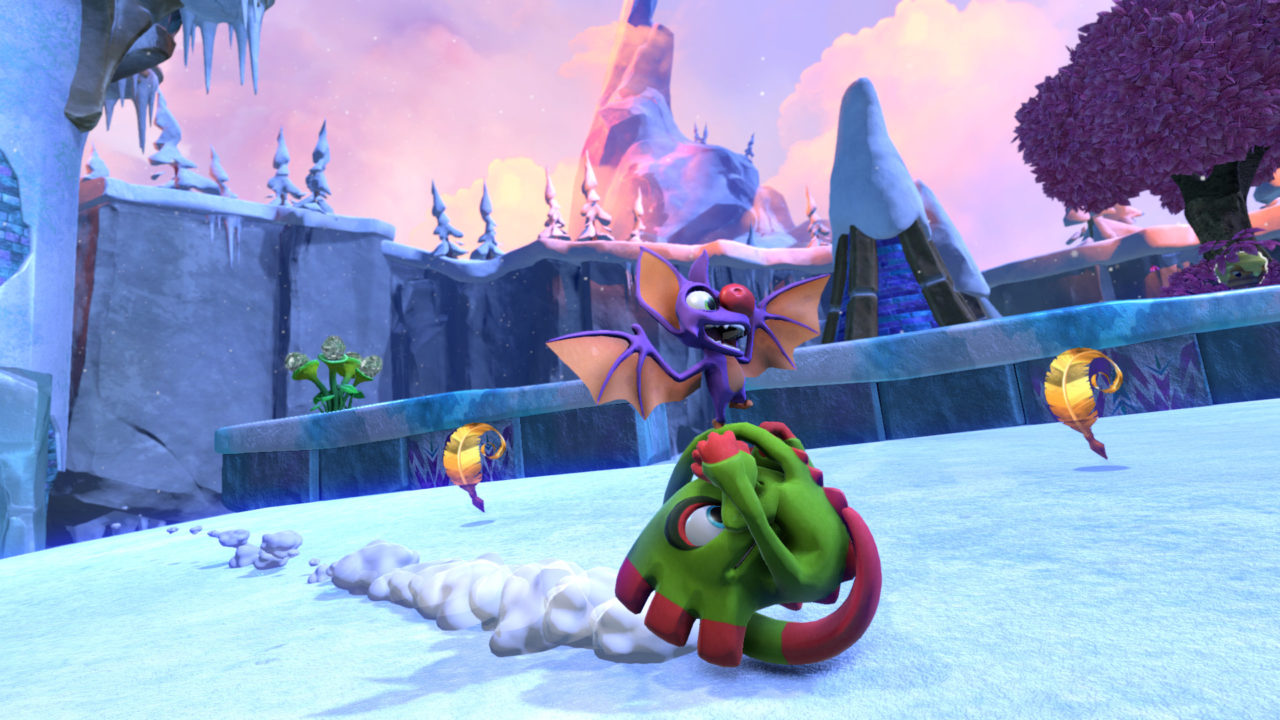 In terms of design we have a glacier, a swamp, a casino, an intergalactic world and of course the first world is another green jungle/forest/field/whatever. What is it with games that the first level always have to be some simple green level with green grass?

This review sounds negative but I did enjoy my time with this game more than I got annoyed. The music sounded pleasantly familiar, which makes sense as it was composed by the same guy from Banjo-Kazooie. The graphics look surprisingly nice; it’s no AAA grade, but if Banjo-Kazooie was made today, I’m sure this is what it would look like.

Yooka-Laylee seems to be selling well, but I am a bit puzzled about who would want to play it besides kids and older gamers who are nostalgic about 3D platformers, especially Rare games. The game tried to update Banjo-Kazooie for the modern era but it didn’t modernise many of the elements. Games like Ratchet and Clank and Super Mario Galaxy made 3D platformers more fun, accessible and got rid of the bad mechanics, so Yooka-Laylee should have borrowed more from modern games…instead of spending time placing meta-humour about its gameplay being outdated.

I do hope the success of this game leads to more 3D platformers in the future starring mascots that aren’t just Sonic and Mario, because nobody remembers realistic human characters from Call of Duty. I’m glad Yooka-Laylee was made, paying tribute to one of my favourite games from my childhood, but I wonder if the developers were better off convincing Rare to make a proper Banjo-Kazooie sequel, which of course would have a bigger team and financial resources than this game would.

I did like Yooka-Laylee, despite many disappointments and frustrations. If you’re interested in this genre, or fondly remember playing these mascot platformers back in the day, check Yooka-Laylee out once the price has dropped and the game’s issues has been ironed out through updates!