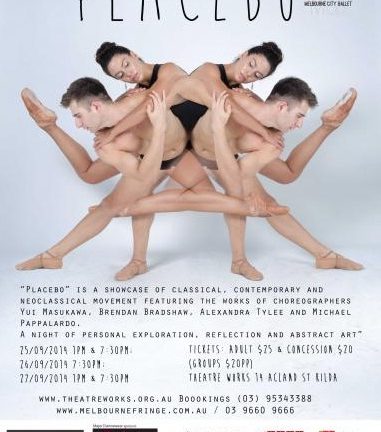 The Melbourne City Ballet joins The Fringe with their spectacular piece “Placebo” featuring the works of choreographers Yui Masukawa, Brendan Bradshaw, Alexandra Tylee and Michael Pappalardo. The performance explored the fragility of mind, reflection, power and control through a balance of classical and contemporary ballet.

The stage opens to the silhouetted female lead emerging from the haze of the smoke machine. Everything is unknown, no face, no apparent costume, no context, just her form which fills the silent darkness. As you wonder how the due dance will play out, eerie orchestral rhythms fill the room. Now begins a sequence of acts that transition between powerful emotions, ranging from lovers’ bliss, rejection, denial, nightmares, confessions and self exploration.

The two acts contrast and complement each other, as the setting shifts from a female to a male lead. As the sound track moves from gentle melodies to dominating dramatic drum beats, the shape of movements move further away from classical, to neoclassical, to contemporary and abstract art. The will be ambiguity and classical ballet becomes deconstructed filling the room with raw honesty, expressing the protagonist’s mindset. It is indeed a visual feast and you will marvel at the precise composition.

Praise needs to be given to the lighting effects, where changes were simple yet dramatic. With only a few light sources, it had a dynamic ability to create depth and meaning. It was indeed the narrator that linked the performances, as spotlights drew our attention to the individuals, overlay of red filters amongst smoke revealed danger whilst soft tones indicated the evolving dance was an illusion of the dancer’s mind.

Overall Placebo is a poetic commentary on self reflection displayed in smooth transitions of twists, turns, lifts and much synchrony. Interestingly, it shows the tension between strength in the body yet fragility of mind. 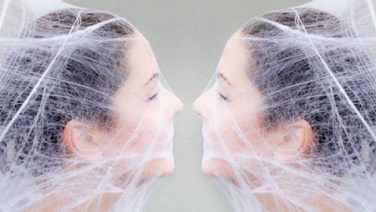 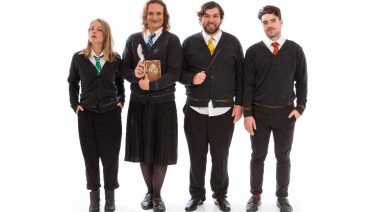 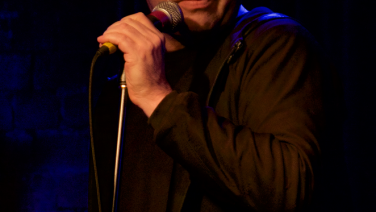