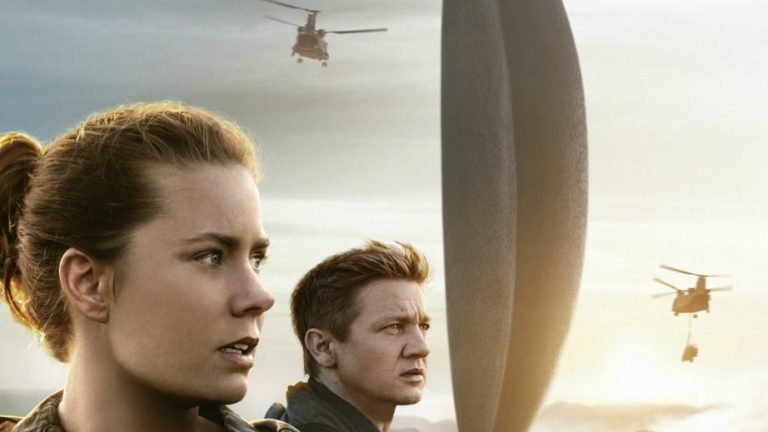 Arrival is the latest film by Canadian director Denis Villeneuve, written by Eric Heisserer and adapted from a short story by Ted Chiang. It’s a science-fiction film in which aliens arrive on Earth and Dr Louise Banks, a linguist, played by Amy Adams, is asked to help decipher their language in order to find out their purpose on Earth. Over the course of the film we join Dr Banks in solving this curious puzzle, as she races against the worldwide chaos caused by the presence of these creatures. Interspersed with the plot of Dr Banks and the aliens is another storyline involving her daughter, which not only adds emotional weight but also ends up being quite a central element in understanding the film itself.

There’s an absolutely brilliant confluence of visual, emotional and intellectual elements that keep you engrossed and awed throughout the film’s duration. Everything just comes together so well.

First, let’s talk about the visuals. In particular, all the things to do with the aliens are immaculately designed. The aliens are these kinds of seven-limbed knuckle squids which in the film they call “heptapods”, and they land in twelve identical ships which seem like particularly aerodynamic skimming pebbles. You might have seen them on the poster. Inside the pods is a long rectangular room with a groovy gravitational shift, and the first time we experience this gravitational shift is one of the coolest things I’ve seen in a film this year. In the room there’s a glass screen behind which the heptapods themselves appear enshrouded in a white mist. Finally, there’s the language that the heptapods use to communicate, the language that our protagonist, the linguist Dr Banks, has been hired to decode. Emanating from a tentacular orifice of one of the limbs of the heptapods, the language is basically a black smoky ink which forms circular symbols or logograms that on first glance look like Rorschach tests made from coffee mug stains but really is a set of unique elements that in each circle create an entire phrase or sentence.

Now, I might be biased in my enjoyment of the film due to being a linguist myself, but if anything I feel like a film that involves one’s specialist subject gets put under even closer scrutiny, and the fact that there’s so much actual linguistic basis for what goes on, which I won’t go into, definitely increased how much I got into the film.

This is not even touching the intriguing way the film deals with the passage of time. Towards the middle of the film, we find out a certain piece of information that changes the way conceptualise everything we’ve seen so far and everything we see thenceforth. I’m hesitant in labelling it a twist, because it feels less like a twist per se and more like another piece of the puzzle that the film represents. Though it’s still totally a spoiler, so I’m not going to say what it is. But it comes at the point where Dr Banks unlocks the secret to the heptapods’ language and in doing so is able to look at time in a completely different way. So essentially, by solving the problem of their language and learning this new way of experiencing time, Dr Banks passes on to us, the audience, the ability to see the film differently. It’s really quite a clever narrative technique.

And what the revelation has to do with involves Dr Banks’ daughter, Hannah, who we see in the first few minutes of the film being born, growing up and then dying. Scenes from Hannah’s life are constantly being intercut with the plot of the heptapods, and this really adds a delicate and grounded aspect to the film. There are definitely moments when the film threatens to move into rather oversentimental territory, but its sentimentality always feels earned, or else it pulls back just before getting too sappy. And regardless, the story of Hannah, without giving anything away, is absolutely essential to our grasp of the story of the entire film.

Overall what impressed me was the scale of this film, the way it tied together a worldwide phenomenon to a personal tale, the attention to detail with giant alien ships and tiny wisps of smoke alike, and above all the flagrant optimism for humanity amidst all the flurry of panic and division going on across the world.

Arrival has captivated my imagination the way very few recent films have, and it relays a message of communication and unity that is always relevant, especially today.

Arrival is out in cinemas now.