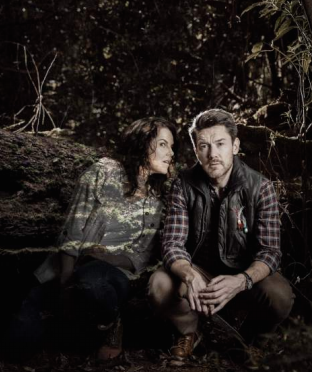 Australia’s first production of The River, by Jez Butterworth, called for a complete revamp of the Red Stitch Actors Theatre. To make a small fishing cabin by the river feel like an arena, the audience is seated on two sides of the stage as they watch a devout fisherman entertain his novice fisherwomen guests. Sometimes you are getting a monologue delivered straight to you, at other times the actor with all the lines is facing away from you, so you’re watching much more of the reacting than the acting, as it were.

The action and setting of this play are so markedly mundane that every tiny detail comes under the microscope. At one point, we are simply watching the fisherman clean and cook the fish that his current housemate has caught for a good few minutes. The music playing from his radio hells to lull the audience into an easy, meditative state that is far from boredom. If anything, these quiet and sometimes completely silent moments are a welcome relief in between the deep-and-meaningfuls about life out in the wilderness.

Specifically, much of the conversation being had is about fish, and the sport of fishing. Butterworth, and his characters, are among the countless writers and thinkers to marvel at how spiritual and sensual an act it is, especially in the dark with only the moonlight to guide you. The River features speeches about how quickly such creatures can be pulled from their world into ours; how brown trout are born but sea trout are made; how fleeting, deceiving and humbling that electric tug of the line can truly be. They might have felt self-indulgent if they were not so exotically entrancing, and even so, he indulges his audiences as much as he might be indulging himself.

No doubt during these monologues we are expected to draw parallels between the scene playing out in our mind’s eye and the scene being played out on stage, between both the fish and the women that the fisherman reels in and routinely consumes. The playwright, and arguably the director, John Kachoyan, give us many invitations to follow this line of interpretation, sometimes just short of having a character say “there are plenty more fish in the sea,” but I much preferred to follow the gaze of the characters, to look out at something larger and more ethereal than the oft-portrayed search for that special someone. The strength of the familiar characters and setting lies in their relatability, achieved by the cast – Ngaire Dawn Fair, Dion Mills and Christina O’Neill – the set designer, Chloe Greaves, and the lighting designer, Clare Springett, who bathes the scene in a multitude of gentle, cosy hues. On the other hand, the value of the extended poetic dialogue lies in its novelty, in its distance from the confines of the cabin, the play’s one, unchanging set. While the two worlds certainly take turns at being the entry point to each other at various points in the show, to peer into the wonders of the aquatic world and think only of ourselves and our own world feels like a wasted opportunity. Of course, it is important to see ourselves onstage, but it is also important to step outside of ourselves. Not everything has to be about us. Sometimes a speech about fish can actually be about fish.