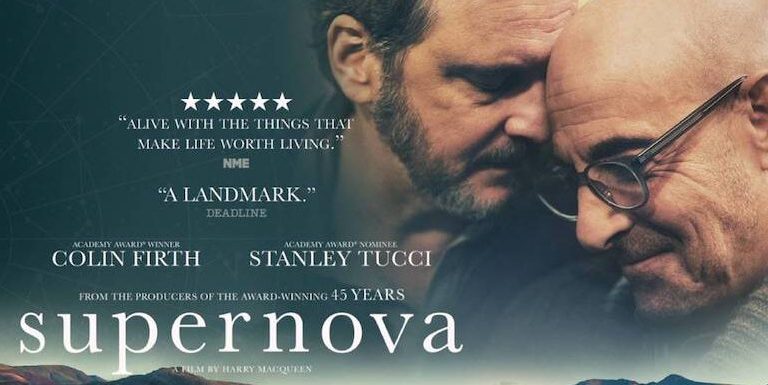 “It’s not about fair, it’s about love”

Forgetting can be really upsetting. For something you have known forever to just escape your mind ranges from inconvenient to devastating. Especially when it happens against your will. Dementia has long been explored in film. Even the Oscars have rewarded it this awards season with nominations for The Father. Supernova tackles the same issue, and while it is traditional in its narrative approach it is by no means less effective.

Partners Sam and Tusker pack up their RV one last time to travel across the United Kingdom. Diagnosed with early-onset dementia, this farewell trip is for Tusker to say goodbye to his friends and family. As their journey goes on, uncomfortable secrets are revealed and their love for one another is tested like never before.

Colin Firth and Stanley Tucci are unstoppable together. Playing Sam and Tusker respectively, their chemistry is subtle yet extraordinary. While watching, it is hard to believe the two are not together in real life. They play off each other so well which is exactly what the film requires. If they were not this good, everything would have fallen apart. With such powerhouse lead performances, the supporting cast could really take a step back but they did not. Their presence helps fill in the world of the protagonists to make it that much more intriguing. 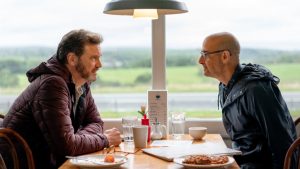 The focus in Supernova is the relationship between Sam and Tusker and how dementia threatens their love. This is told slowly but never does it drag on. Every scene builds from the last revealing more about each character throughout the film. This allow for secrets to fester for them and the audience which does an excellent job to create tension. While the film takes us through the early stage of dementia, it does an excellent job showing the impact the prognosis has on the affected and carer. This allows for an in-depth look that makes the emotional moments that much more heartbreaking. That said, there are many moment of levity and genuine happiness that not only help lift the mood but show even when facing the unknown humans still find ways to laugh and smile.

Silent winner of the film is the English countryside. If there was no pandemic, tickets would be booked and cottage life in full effect. Much like the narrative, the cinematography takes its time to linger on the landscape and characters. It gives the viewer the change to examine just how these people are feeling with every minute detail that comes across their face. Its simplicity works wonders for the film.

Knowing someone who has dementia makes this film especially poignant. It tells one of many stories that challenge families daily. The portrait it paints is sad but true to life. That makes it well worth the time to explore and understand just how hard the illness is and how strong and determined are those who have it and have to look after someone who has it. Supernova explodes with compassion and love that you simply will not be able to forget.

Supernova is now in cinemas across Australia (released 15 April 2021)