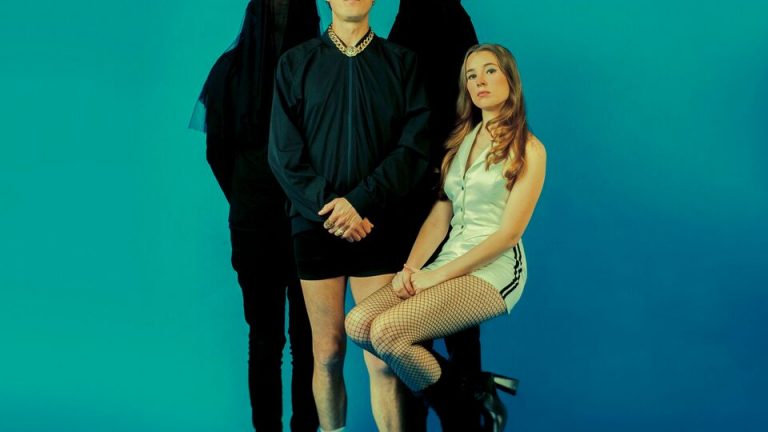 Confidence is as confidence does. Spending all night at a Confidence Man gig will get your ‘confidence’ level up so much  that you could probably talk your way into parliament. Probably.

Our new national creators of floor-filling dance music – the brain sparks of Reggie Goodchild and Clarence McGuffie, have nearly finished the Aussie side of their Confident Music for Confident People tour. SYN got to exhaust themselves dancing, alongside hundreds of other movers and shakers, during their Melbourne show at 170 Russell on May 20th.

On a scale of 1, *inhales* how bloody great is it when a band you’re getting into delivers so much more than the one song that got everyone’s heads perked up? *exhales* Yeah, it feels good alright. After the usual slow boil of pre-gig excitement, Confidence Man kicked the pot over with a pulsating rendition of ‘Bubblegum’. This was their second major single; released in early 2017 which solidified Confidence Man’s place as genre-crossing creators. The song’s chirpy, chewie-pop eased everyone in, latecomers struggling to find a decent view of Janet Planet, Sugar Bones, and the Veiled Men.

The first song can be a make or break for plenty of gigs. However, if you’re familiar with Confidence Man’s stage presence, you will know there’s no chance of the latter. They pull out all stops. Cleverly dorky dancing, lightning-flash-fast costume changes, outlandish characters; it isn’t so much a gig as it is a primary school talent show that grew up and is, well, actually talented.

It is also gratifying to see the translation of an album to a live show. Confidence Man, as a party-starting band, aim to keep their punters moving at all times. ‘Better Sit Down Boy’ (a personal favourite thanks to its big beat style), was 100% worth the anticipation. They got the entire crowd to actually sit or crouch down on the ground. For real. You know you’ve got a loyal fanbase when you have that kind of command.

Has anyone else noticed spoken word is really working its way into a lot of music recently? It’s only natural that someone would eventually take the piss. ‘C.O.O.L Party’ turns a vapid recount of “the party of the year” into a danceable in-joke, a musical mockery of that person. You know, the one you laugh at, not with. It’s even better when watching Janet Planet prance and thrust around the stage spouting lyrics like “It’s the party of the year and I know because I’ve been to heaps of parties”.

With ambitious stage antics comes a necessity for musical interludes. With Janet Planet and Bones often occupied by costume changes, the Veiled Men offered brilliant renditions of instrumental pieces, including ‘Sail Boat Vacation’. Fueled simply by synth, drums, and a bizarre dancing projection, a moment to ‘let me catch my breath’ was granted. Sure, the Veiled Men continued to bob up and down but there was no pressure to match their energy – the performance seemed intimate, though their veils masked any facial expressions.

Back on the main floor, complete with light-up bra and shoulder pads (10/10 costume), the entire group launched into their most meta song of the album – ‘Don’t You Know I’m In A Band?’ As various band groupies have confirmed, the behaviour described in this song is scary accurate. It’s also 100% the new ‘I’m Too Sexy’ by Right Said Fred*. Though all their dancing was similarly ridiculous, Planet and Bones’ electro pas de deux during this number was particularly spectacular.

Leaving the best until last (as seems standard practice for most first-album bands), Confidence Man led a crowd-sourced acapella version of ‘Boyfriend (Repeat)’ as their penultimate track. It’s a song that attracted plenty of attention after its 2016 release, both good and bad. Who cares about the bad though? The people that really cared were thrashing cheerfully along with them that night. One of the best parts of Confidence Man’s music is that there’s something for nearly everyone.

A crowd whipped to frenzy, a wiggle off the stage, and it was done.

If there’s only one album, and one track is missing from the live repertoire, you can expect the band will fulfill the crowd’s wishes. And so, the finale-appropriate ‘Out The Window’, complete with its anthemic lyrics, delivered the end of an incredible experience. Confidence Man, I’ll see you again.

*Here I was thinking I was the first one in thinking this. Nope. Everyone recognises the inspiration behind these pitched-down vocals and self-loving lyrics.