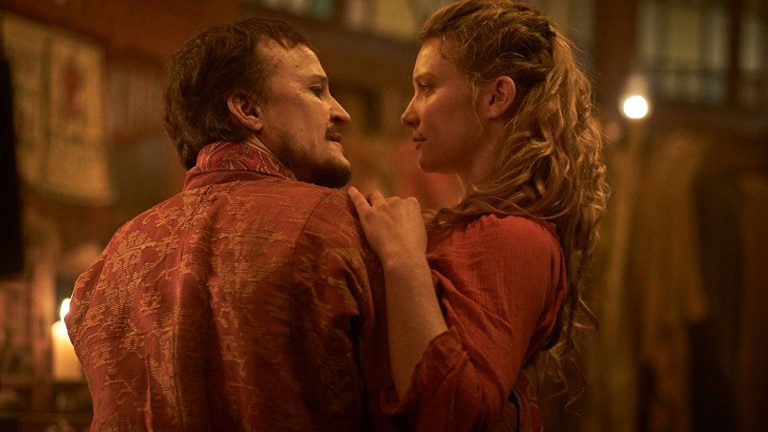 Australia is a country that’s well-represented in film, having contributed greatly to the medium and even helped advance it. These contributions have not been as prolific in recent times, yet as this tale proves, none of Australia’s creativity has been lost; rather, it has been hidden away.

In pre-Industrial England, the villagers of Seaside – a rural town ironically named, as there is no sea within walking distance – are entertained nightly by the puppeteering of Mr Punch (Damon Herriman) and his wife Judy (Mia Wasikowska). The couple are gifted puppeteers and have aspirations of living wealthily in the city, but after a violent tragedy strikes the household, Judy becomes heartbroken and finds herself longing for vengeance.

There was conversation in the SYN office not long ago about Australian cinema’s inability to market itself internationally. During said conversation, it was noted how most Aussie films are made with an ocker tone in a desperate attempt to win favour with local audiences, to the detriment of overseas success; foreign markets, meanwhile, are more likely to consume Australia’s exported talent – think actors, crew and production services – without any knowledge as to their origin.

Mention has been made of this conversation because Judy & Punch is a rarity among its contemporaries, a locally-made film that doesn’t condescend to antipodean cinemagoers. Beneath the façade of cockney accents and an English setting is a talented cast and crew of Australians, helmed by Mirrah Foulkes, telling a story that could take place in any location, during just about any period of history. More to the point, it’s a picture that is impressive in its own right.

Leading the film is Mia Wasikowska, an actress whose name should be familiar to most audiences, having appeared in Disney’s live-action Alice in Wonderland. Cynics may view Wasikowska’s inclusion as a blatant means of grabbing the layperson’s attention, but the truth is her casting is a result of her outstanding talent, and her performance in Judy & Punch proves that. Wasikowska demonstrates her full range, being congenial in one scene, and effortlessly transitioning to a raw, pained persona in the next.

Her opposite number, Damon Herriman is equally worthy of praise. He has long been renowned for his dramatic talent in his home country, yet is only now being lauded globally, having recently had supporting roles in Once Upon a Time in Hollywood and The Nightingale. Much like those two releases, Herriman is playing a gentleman whose superficial charms mask a darker persona – doing so runs the risk of him becoming typecast, but when he plays the role so well, one can hardly blame him.

The casting of Herriman in an eerily similar role is not the only parallel between Mirrah Foulkes’ film and The Nightingale. Both films take place in the past, have swearing, have brutal scenes of violence, are directed by women – in the latter’s case, Jennifer Kent fills the role – and are female-led tales of revenge. Yet in terms of their execution, the two pictures differ greatly, and in this respect it’s Judy & Punch that proves the superior production.

One point of difference is that The Nightingale has no understanding or appreciation of subtlety, subjecting the viewer to acts of graphic violence, assault and abuse. Judy & Punch understands that not everybody is comfortable with watching such material, and knows the camera does not need to linger on every instance of brutality – such moments happen just off-screen, or are implied through other means. Hence, Judy & Punch makes for a less confronting, yet nonetheless bold experience.

Also making Judy & Punch more palatable is the distinction in tone. Where The Nightingale presents a world that is miserable, depressing and without humanity, Foulkes’ film possesses a more promising atmosphere with an aura of hope always present. Said aura is found in the playful score of Francois Tetaz, the quirky characters encountered in and around Seaside, and the bright costumes adorning the characters, all of which provide the picture with personality.

Judy & Punch is a creative and subversive story of retribution that demonstrates the potential of Australian talent. The surety of Mirrah Foulkes’ direction, coupled with the superb performances, make this one of the finest narratives to emerge from the Antipodes in recent memory – even if it pretends otherwise.